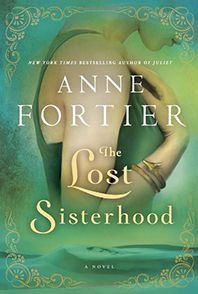 A partial synopsis from The Author's Website:  Anne Fortier's latest book, THE LOST

SISTERHOOD, is the story of Diana Morgan, an expert on Greek mythology, whose obsession with the ancient Amazon warrior women propels her on a quest across Europe in search of a league of secret sisters and the treasure they have been guarding since the days of the Trojan War. It is a breathtaking, passionate adventure of two women on parallel journeys, separated by time, who must fight to keep the lives and legacy of the Amazons from being lost forever

My Thoughts:   Wow!  This book is a fast paced nail biter.  Diana is our current day heroine and Oxford academic.  She is offered a nice sum of cash to decipher writings inside a temple at an archaeological site.  Myrina is our main character in ancient times tasked with taking her younger sister into a large city for the Moon Goddess's healing powers.  As the author bounces between timelines we are led into grand palaces, haunted by dark dreams, kidnapped by pirates and seduced by strong, handsome men.  I don't want to tell you much more so as not to spoil the story, but I can tell you I want to read more from Anne Fortier.

What have you been reading?