Mr. Big Stuff was invited to a wonderful birthday party!  The invitation mentioned the boys would  be getting dirty, so please wear something old or bring a change of clothes.  We were also asked to each bring a towel.

When we arrived, there was a big mound of top soil in a shady spot of their yard.  The party favors were shovels, along with cars to push through the dirt.  The kids LOVED IT!! 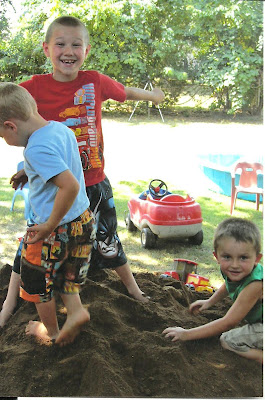 (Perhaps we try a little too hard to stay clean?)  Some of the kids enjoyed just scooping the dirt in their hands.  Others wiggled their toes down into it!  They played and played and laughed and laughed.

Hot Dogs and Cheetos were the menu, another big hit with the young ones!  The cake was a big dump truck filled with oreo crumbs and gummy worms.  Yum!

I'm sorry I don't have many photos.  Here is Mr. Big Stuff in the dirt!  He hopped right on top! 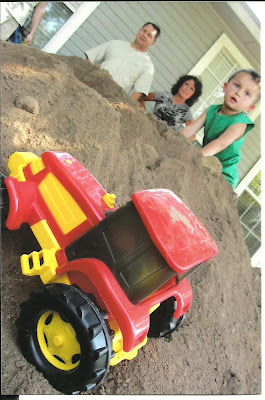 Great picture!  As the party wound down, kids were offed a dance through the sprinkler. 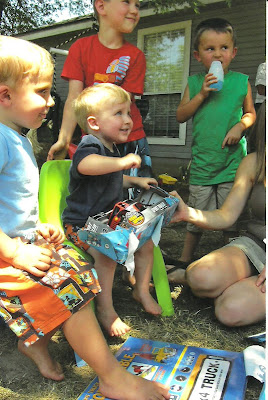 It was a way cool party for boys!  After all the birthday cake was eaten and the kiddos went home, the hosts of this exciting event used the top soil for a landscaping project!  Aren't they just the clever-est of the clever?!

The invitation was key to this being a successful party.  There were no surprises for the guests.  Each parent was prepared for dirt and water.  The children had a ball while the adults could just visit - even the hosts!  It was one of those wonderfully simple ideas!  Hey, why didn't I think of that?  ;-)