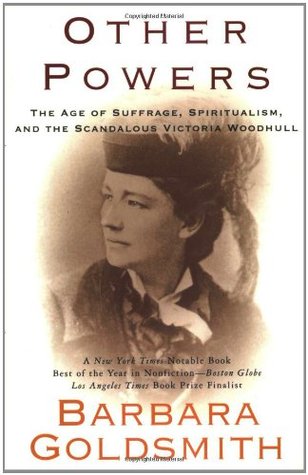 SOURCE
A Partial Synopsis from Good Reads:  Barbara Goldsmith's portrait of suffragette Victoria Woodhull and her times was hailed by George Plimpton as "a beautifully written biography of a remarkable woman" and by Gloria Steinem as "more memorable than a dozen histories." A highly readable combination of history and biography, Other Powers interviews the stories of some of the most colorful social, political, and religious figures of America's Victorian era with the courageous and notorious life of Victoria Woodhull--psychic, suffragette, publisher, presidential candidate, and self-confessed practitioner of free love. It is set amid the battle for women's suffrage, the Spiritualist movement that swept across the nation in the age of Radical Reconstruction following the Civil War, and the bitter fight that pitted black men against white women in the struggle for the right to vote.

My Thoughts:  Autobiographies and biographies are my favorite genre of books.  I am absolutely fascinated by people and what lead them to their best (or worst) decisions.  When this book caught my attention, I had no idea who Victoria Woodhull was.  What a shame!  She rose from poverty and abuse to tremendous power.  Victoria passionately argued not only for the right of women to vote, but also to earn fair wages, to own property.  For some women of this time era, marriage was nothing more than enslavement to their husbands.  One chapter of the book lists all the garments women were expected to wear and how much each weighed.  No wonder females were prone to fainting!  I would definitely recommend this book to anyone who enjoys history of the Victorian Era.
What have you been reading?
;-)  -Marci
Posted by Stone Cottage Adventures at 4:43 AM